-- Saddleback Farm --
The Horse may have been King, but
the Jersey Cow was Queen of Butter Production!

Curiosity led me to finding out more about Saddleback Farm in East Baldwin, Maine. Today perhaps a foundation or a well cover may be the only evidence that this farm ever existed. I initially called the East Baldwin Town Office. -- No Answer -- I then thought perhaps locate a local realtor with knowledge of East Baldwin. That worked! The realtor led me to Josiah Pierce who led me to Peter Cyr, one of the local historian. Joe Pierce told me an interesting story. When the last Pierce to own the farm died her will stated that all was to be torn down. The car was to be driven into the well and buried. However, lucky for the car, the chauffeur drove off with it.

Henry Pierce may have been the original owner of the farm, but he ventured out to California. Eventually, Orestes moved West. Orestes obituary presents tells the story of an accomplished man who made worthy contributions to the world.

More to this story will unfold in future Lost Trotting Parks Posts! 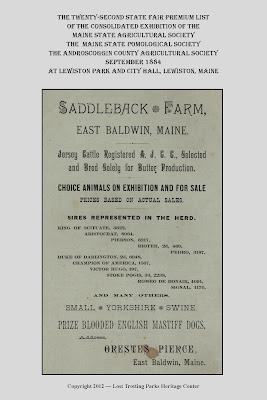 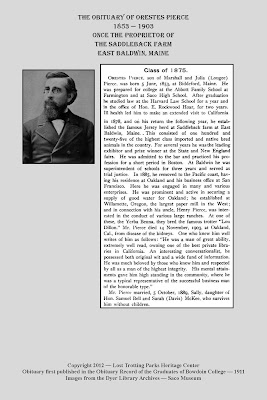 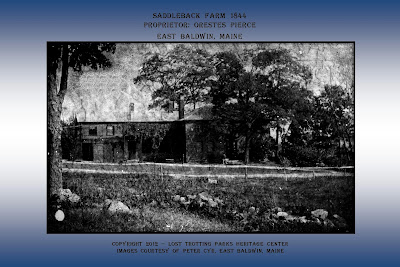 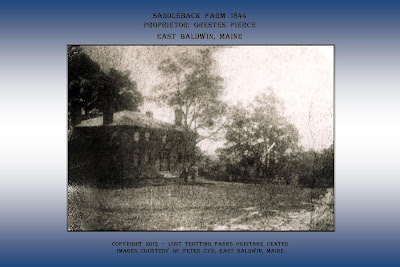 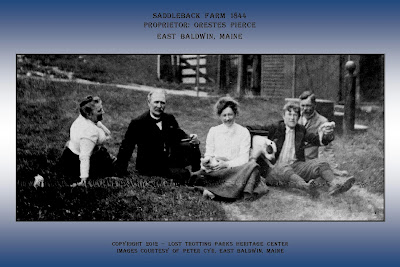 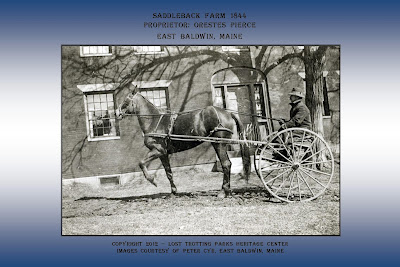 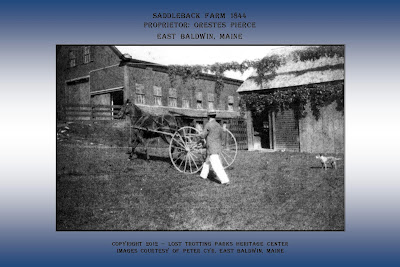 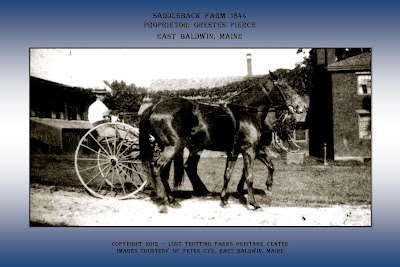 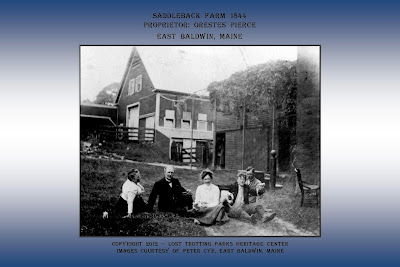 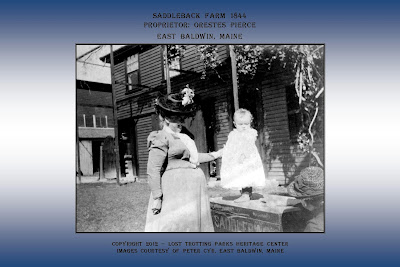 Posted by Stephen Thompson at 8:09 PM

The Lost Trotting Parks Heritage Center is moving it online museum to a WordPress website. This blog will serve as an archival site for the more than 3000 storyboards that have been created for the last five years.

The mission of the Lost Trotting Parks Heritage Center is to preserve the stories and images of the 19th century to present day that illustrate the history of Maine's harness racing, lost trotting parks, fairs, agricultural societies, Granges, and the significance of the of the horse in society.
Our plan is to reach our mission is through Preservation, Education, Promotion and Partnerships.
Through the Center's website and educational outreach to Maine school students, community organizations, agricultural fairs, and businesses, the Center will retell the once told stories of a slice of Maine history that is quickly being forgotten. Most Mainers have lost their connection to the horse and the horse's contribution to a past way of life. Maine people who work in the harness racing industry are today's living history of the age when the horse was king. Through your financial support of the Lost Trotting Parks Heritage Center, you will help to tell the stories of Maine Harness Racing and horse breeding throughout the ages.

The Lost Trotting Parks Heritage Center is a Maine registered nonprofit . We have been approved by the IRS to operate as a nonprofit. Your contributions are tax-deductible. Contributions can be made through PayPal above or by sending a check to Lost Trotting Parks Heritage Center, P.O. Box 263, Hallowell, Maine 04347. For more information or questions contact Stephen D. Thompson, Creative Director, at lifework50@gmail.com. 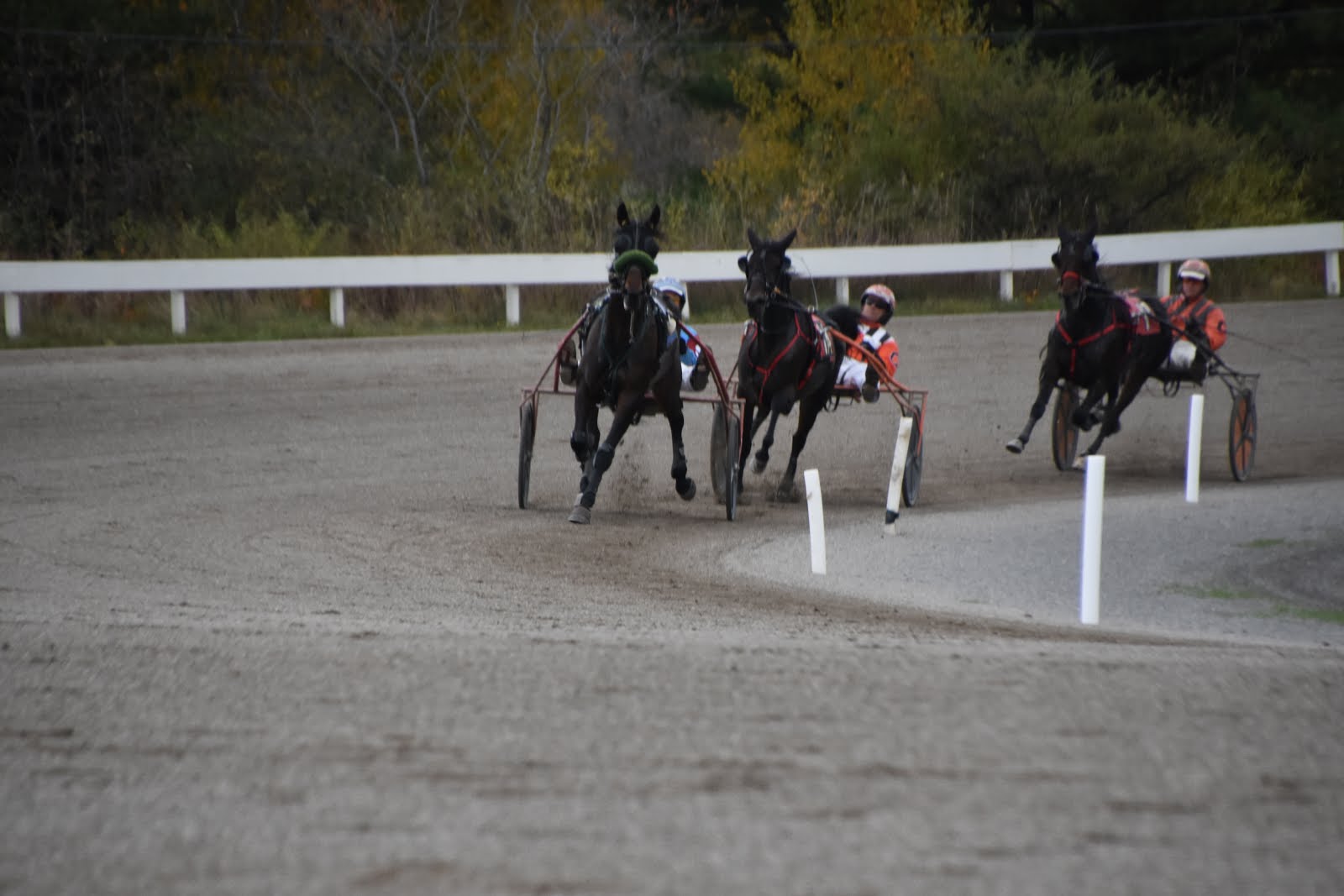 For the Latest on Maine Harness Racing

Your Comments are Welcomed!

All posts are now placed within categories. Become familiar with the categories. Posts of interest to you may be found more easily through categories.

Check out NEPLAINS.COM for your Harness Racing Memorabilia!

Search by Town or Keywords

After the American Civil War, the trotting horse industry flourished. Trotting parks were built throughout the State of Maine. At one time, there were more than 92 trotting parks in Maine. Few of these parks remain today. You are invited to participate in this blog and recreate the rich history of Maine's trotting parks and the horses that established the industry. Copyright 2009

For best navigation results, open the links within the blog archive. The links present the titles of each post. To understand the flow of these posts, start with the April 2009 posts. Post comments provide additional information on the topic! Please e-mail your comments to lifework50@gmail.com.

Your PayPal Donations will help us pay expenses tied to our research! 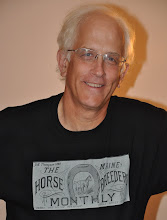 Exploring the History of Harness Racing

Trotting at the Belfast Fairgrounds

In the 1891, Colorado artist, C.B. Fish, produced an oil painting of the famous trotting stallion Nelson. The Lewiston Sun Journal reported that Fish had completed the painting and would ship it to Sunnyside Farm. Fish also painted a trotter from Skowhegan named All-So. We do not know if the painting of Nelson still exists. The two paintings below are examples of Fish's work. If you have knowledge of the oil painting of Nelson, please e-mail Stephen Thompson at lifework50@gmail.com or call 207-623-3076.
The Fish pictures were made available by Gallery 44.
To inquire about the Fish paintings contact:
http://www.gallery44llc.com 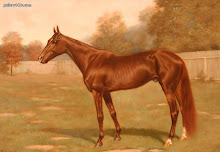 In Search of Artist T.J. Scott 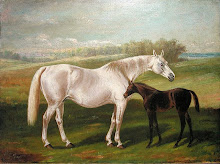 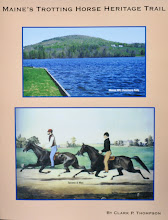 Published in 2009, Maine’s Trotting Horse Heritage Trail, guides readers through the golden age of the trotting horse. Covering the period between 1820 and 1892, the author, Clark P. Thompson of Bangor, Maine, introduces us to the horses, the people, and places that established the trotting industry in the State of Maine. Thompson’s well researched publication highlights twenty key moments in Maine’s evolvement in trotting. The Heritage Trail begins in Old Orchard Beach and ends in Dover-Foxcroft. This book is your guide to historical markers that have been inscribed and placed in designated Maine communities.

Journey with us and return to the Golden Age of Trotting.

In the book’s foreword, Michael, D. Andrew, President of the Maine Standardbred Breeders and Owners Association, states, “With this book, Clark Thompson has done us a great service by memorializing some of the great progenitors of the Maine trotter, the owners who supported breeding and racing, and the tracks where these horses pleased thousands of Mainers in the 1800s.”

For more information about this book and how to obtain a copy, contact Clark P. Thompson by e-mailing

The trotting industry flourished from the 1820s through the early 1900s. There are a number of reasons that for many the excitement and interest in trotting has diminished. However, the trotting industry still exists. Its history is still rich. Our mission is to conduct research that will reveal to us the history of Maine's forgotten Trotting Tracks and bring back the images and people of another age. Our posts of the Belfast Trotting Track are examples of what we are attempting to find. We will partner with local historical societies, work with local government, and individuals interested in this endeavor. Contact us and help us to fulfill our mission.
NOTE: News articles and other text displayed on this web site are existing texts given to me for use on The Lost Trotting Parks Blog. There has been no additional research on my part to ensure that these accounts are accurate.
Stephen D. Thompson
P.O. Box 263
Hallowell, Maine 04347
E-Mail: lifework50@gmail.com
Cell Phone: 207-623-3076

Nelson, the champion trotter, was owned by C.H. Nelson of Waterville, Maine. C.H. (Hod) Nelson owned and operated Sunnyside Horse Farm. The farm's location is where the JFK Mall is now located. At one time, Nelson owned the fairgrounds of the North Kennebec Agricultural and Horticultural Society. We are seeking individuals or organizations that may have Nelson memorabilia, photographs, equipment, and trophies. In addition, we are looking for photographs of the fairgrounds and trotting track that was once located behind the Pine Grove Cemetery. If you have information regarding Nelson or the fairgrounds, please e-mail Stephen Thompson (lifework50@gmail.com) or call 207-623-3076.

Bethel: The citizens of Bethel met Tuesday and formed an organization known as  The Riverside Park Trotting Association and chose the following officers: C.M. Wormell, president; J.A. Twaddle, vice president; E.M. Walker, secretary; E.S. Kilborn, treasurer; trustees, G.P. Bean, chairman; J.M. Philbrook, H.M. Hastings, Moses A. Mason, O.P. Farrington,  E.C. Rowe. The trustees have leased the land for ten years and intend to have one of the best tracks in the state. The location and land are all that could be asked for the trustees mean business and will spare no pains or money.

Check out The Bethel Journals!

Trotting at the Dover County Fair

Today used as a fairground without a trotting park

Trotters at the Kite Track 1893 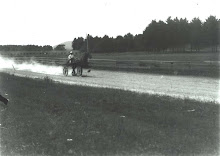 Open Grandstand in background to right

Miss Strike and Foal by Aldayone 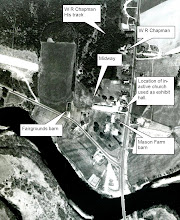 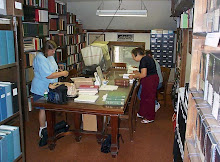 Belfast native Henry Gentner who raced trotters at the park

Map of Belfast with Trotting Park

1996 aerial view of where Belfast Trotting Park was once located

A discontinued road between Reny's Plaza and the Goodwill Store leads to the land where the trotting park was once located.

-- The Online Museum for Harness Horsemen, Harness Racing Fans, Maine Agricultural Fair Followers,
and Those Who Love History! --
The Lost Trotting Parks Heritage Center presents Maine-based research findings related to lost trotting parks, noted horses, events, and the people who are involved with agricultural fairs and harness racing.
To contact the Center by telephone call 207-956-9542 or 207-623-3076 -- By E-Mail: lifework50@gmail.com
-- Download Your Digital Copy of "The Maine Spirit of the Turf" --
Become an E-Mail Subscriber to "The Maine Spirit of the Turf" -- An Old Styled Periodical for Today!
2012 Dates for Maine's Agricultural Fairs and Harness Racing
-- Affordable Reproductions of Currier & Ives Lithographs --
Blue Skies -- Hod Nelson, Once a Famous Horseman, Sunnyside Stock Farm, Oakland Road, Waterville, Maine
-- Times Were A-Changin' --
Once A Famous Horseman -- The Life & Times of Hod Nelson and his Famous Champion Trotting Stallion, Nelson 4209, The Northern King! -- Though Song and Vintage Images --
Maine Sire Stakes Champions and Pedigrees ONLINE
See how you can create your story and get it posted
at Profiles of Maine's Harness Horsemen.
Check out Profiles of Maine's Harness Horsemen!
Featuring Nelson 4209 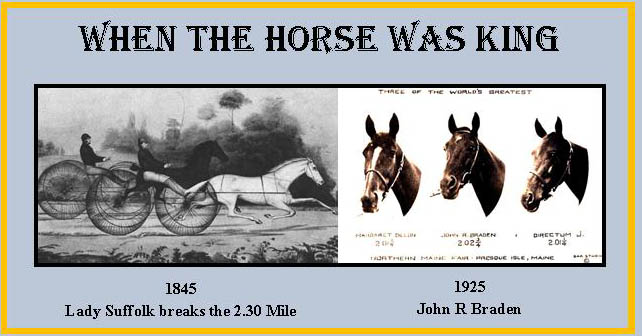 Once Recognized as the Maine Horsemen's Newspaper

The newspaper, Turf, Farm, and Home was first published in Auburn, Maine around 1890. This newspaper was considered the horseman's periodical. In 1897, the paper merged with Maine's Horse Breeders' Monthly and J.W. Thompson of Canton became the editor. About 1912, the Turf, Farm and Home merged with the Maine Press and continued publication until 1920. The Fogler Library has issues from 1912 on. However, there are only 24 documented issues of the paper between 1890 and 1912.
This is a call for issues of the Turf, Farm, and Home.
Contact Stephen Thompson at 207-623-3076, if you know where there are existing issues of this newspaper.
Issues from 1890 to 1910 will tell the stories of Maine Horsemen
during the age of 'When the Horse was King.'